Breaking the "Big C" News: To Others

I email extended family and friends.

"A number of you know that I had several episodes of blood without bacteria in my urine during the last two weeks before our daughter’s wedding. After a number of diagnostic tests in August, I had surgery a week ago to remove an abnormal growth in my bladder and to have two biopsies from two different areas of the bladder wall.

"Today I learned that the pathology reports reveal a very rare (<1%) and very aggressive form of bladder cancer. The cancer has just begun to invade the muscle wall of my bladder nearest the tumor; the other biopsy was clean. My urologist says this cancer was caught as soon as humanly possible. Still, I will require full-body chemotherapy for about a month before undergoing surgery to remove my suffering little bladder and build a new one. That surgery will be an extensive one requiring at least one week in the hospital post-operatively.

"My trip to Spain later this fall with my travel mates is off, of course, and I doubt that I will be back at work before 2012.

"I feel very badly for my daughter, whose husband is still in Australia until at least October, because this will be very stressful news for her to digest without him and comes just after she re-commenced her nursing studies.

"I am a tough cookie and will get through this. John’s and my love is deep and abiding and together we will face what I believe is a very optimistic outcome. 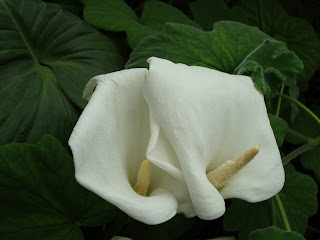 Having said that, I certainly will appreciate your prayers and good thoughts and energy, not just for me but for John, Anne and Tom. Sometimes it is harder on the family than on the patient."

Then Anne and I tell Tom via Skype. He is very sad but glad to hear the cancer can be removed completely. He wonders if it is from fatigue; while here after the wedding he commented to Anne that I was like a cat because of my frequent naps. No, I reply, not fatigue. But I don’t dismiss the idea that the last three months of intense stress leading up to the wedding may have been a factor in bringing the symptoms forward, and I can only be grateful for that since it led to an early diagnosis.